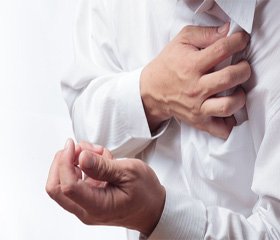 Introduction. Today it is clear that the renin-angiotensin-aldosterone system (RAAS) is not only the most important regulatory system, but also plays a central role in a wide range of pathological processes in different tissues and organs. [1] Changes in the RAAS (both activation and suppression) identified in more than 30 nosology and syndromes. [1,2]

During and after application of the artificial circulation RAAS is hyperactivated in order to the changes in the balance of angiotensin II / bradykinin, what leads to endothelial dysfunction. The angiotensin II activities are also associated with numerous adverse cardiovascular effects, including inflammation, thrombosis, apoptosis, atherosclerosis, fibrosis and plaque rupture. [1]

There is a proven efficacy of angiotensin-converting enzyme (ACE) inhibitors and angiotensin II receptor blockers (ARBs) in ambulatory patients with ischemic heart disease, but efficiency of their use in patients undergoing coronary artery bypass grafting is unstable and inconsistent. [2,3]

Data of International Multicenter Study on Perioperative Ischemia (McSPI)-Epidemiology II (EPI-II), published in 2012, showed that the perioperative use of ACE inhibitors in patients after coronary artery bypass grafting (CABG) is associated with prophylactic anti iflamatory and antiplatelet potential, which can provide further protection from cerebrovascular and renal adverse events [1,2]. More over, the use of ACE inhibitors in the early postoperative period may be associated with a significant improvement in cardiovascular and renal outcomes. Canceling ACE inhibitors after surgery is associated with poor prognosis of non-fatal outcomes.[2]

Materials and methods. At the Department of Cardiology and Functional Diagnostics of P.L. Shupyk National Medical Academy of Postgraduate Education, Kiev, Ukraine, carried out a comprehensive investigation and dynamic monitoring of the 140 patients with ischemic heart disease and postinfarction cardiosclerosis after CABG surgery. CABG was carried out in the CAD surgery Department (leader – A.V.Rudenko) of National Institute of cardiovascular surgery named N.N.Amosov, Kiev, Ukraine.

Patients were examined 7-10 days prior to coronary artery bypass surgery and during following 10 days, 6 and 12 months period after performing surgery.

The criteria for exclusion: hemodynamically significant valvular heart disease, chronic obstructive pulmonary disease, history of myocarditis, permanent or temporary pacing, patients with acute heart failure and implantable cardioverter-defibrillator, atrial fibrillation. During all period of observation with not just holding general clinical examination also it was held dopplerography and ultrasonic scanning (by system Medison SonoAce 9900, Korea). All measurements were performed according to latest recommendations of the American Society of Echocardiography and Ukrainian Association of Cardiology. [6,7,8,9] Software program used for statistical analysis -"Statistics 6.0 for Windows" and Microsoft Excel. Results are presented as mean ± standard deviation (M±SD). Confidence intervals were within 95%, a difference of investigated parameters were considered significant at p 0,05.

Central hemodynamics, diastolic function and preload were not significantly changed.

Moreover the ACE inhibitor group showed no improvement of other parameters of LV diastolic function. Also had a significantly lower down time early diastolic flow left ventricular DTE (161,9 ± 44,7 vs. 177,0 ± 43,08, p = 0.014), although isolated index may not be indicative of the inpairment of the central hemodynamics. A similar pattern persisted 12 months after CABG.

E / Vp (1,75 ± 0,35 vs. 2,32 ± 0,97, p = 0,0019 ) indicates the improvement of myocardial function and reduced left ventricular preload in conditions of a moderately reduced global left ventricular contractility (EF in all patients in both groups during the year after CABG was not significantly changed).

Conclusion. The findings lead to the conclusion that after coronary bypass surgery prescribe of RAAS blockers has a positive effect on the remodeling of the left chambers, left ventricular myocardial function and central hemodynamics, leading to the left heart pressure decrease, reducing left ventricular preload and improving its diastolic function with a moderate reduction in systolic function. However, the effects of ACE inhibitors according to Doppler echocardiography in six months after surgical revascularization is moderate in the form of reducing the size and pressure of an LA (with a slight reverse remodeling of the left ventricle) with a tendency to increase its cavity at constant left ventricular ejection fraction and central hemodynamics. At the same time, the receiving ARBs after CABG allows you to get a significant improvement in most indicators of myocardial function of LV remodeling of the left chambers, central hemodynamics in just 12 months after surgical revascularization, however, these positive changes are persistent and significantly higher than those in patients receiving an ACE inhibitor with a moderate reduction of LV systolic function.